How I load up for camping trips

Home/ Motorcycle Camping/How I load up for camping trips

How I load up for camping trips

How I load up for camping trips.

I'm an old guy and I like to camp but I refuse to be uncomfortable so I carry a lot of gear. As in furniture, and bigass poles to hold up a bigass rain fly. I've been at it for a while now and I think I've gotten the ultimate cargo stowage system for what I carry and the way I ride. Time is cheap these days so I thought I'd write it up. Actually I just randomly found the picture file and remembered I have these to show off.

I don't like top boxes because they stick out so far and stand so tall. I want to keep all of the weight as low and as forward as possible. It helps a lot when you lean way over. Where I live, we have lots and lots of curves. This bike loves them as much as I do but I've found it works a lot better when you pay extra attention to the center of gravity. Maybe it has to do with the fact that I rode

Honda Sport Touring bikes before I got the V-Strom.

So I have a large duffel that I turn around long ways. That way the heavy stuff (tent, Kermit chair, folding table, bag full of bigass tent spikes, etc) gets tucked in behind my back, not sticking out to the sides or weighing down the pannier racks. 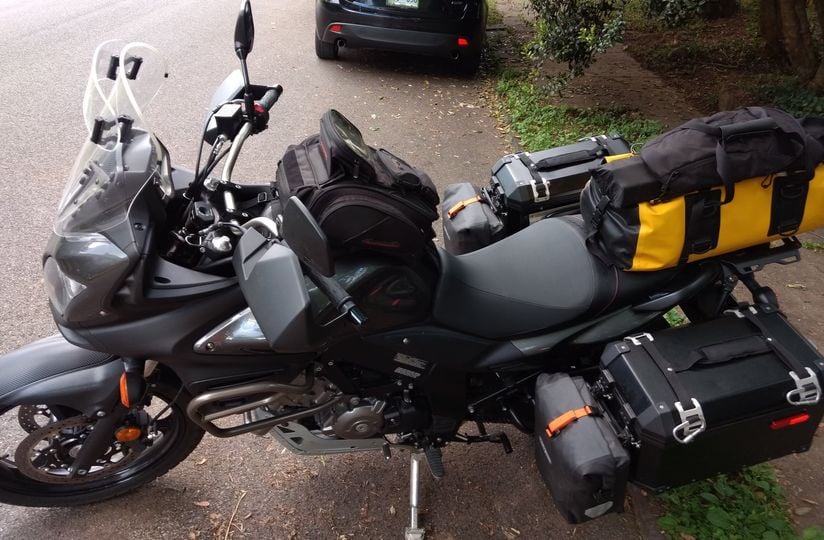